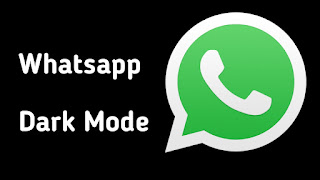 Now you can download the Black WhatsApp 2020 [Dark WhatsApp 2.20.117] and get the dark WhatsApp with a completely official (unmodified) version on Android and iPhone.  The night mode on WhatsApp is significantly different from what we saw in other applications such as Black Messenger, for example, the color here is not actually black or even dark gray.  The new dark WhatsApp wallpaper is in very dark blue, with white writing in.  Dark WhatsApp for iPhone on the other hand is different because it is actually black, but with text in blue.

In fact, you can now get the new WhatsApp in the night mode by downloading the official version from the next link below, after which you will be able to run WhatsApp Dark Mode simply from within the settings with just a click of a button, and you will not even have to join the WhatsApp for trial versions as we did from  Before.  To download the latest version, go to the Google Play Store or the previous APKMirror link.

With the development of OLED screens as well as AMOLED in the recent period, most companies and even application developers have become interested in adding the ability to operate the night mode in their applications.  The proof is that we saw the leading companies like Apple, Google, and also most phone manufacturers adding Dark Mode with the new custom Android interfaces.  Of course, this is for a lot of reasons, from the beauty of black to saving battery power, and finally, many users love dark colors.  And now, it’s time for the WhatsApp Black app to follow the same approach as the previous popular apps that comes with the Dark Mode night mode in its latest beta update with WhatsApp version number v2.20.85.

One of the most popular apps in the world that actually hasn’t entered this game yet, is WhatsApp.  From around a year now, we have seen many rumors circulating about WhatsApp in night mode, especially after the possibility of using WhatsApp Black Web.

Finally, enjoy the night mode on WhatsApp on your Android phone.